A piece on the proprietor. 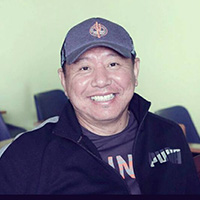 Mr. Sonam Yakha was born on 15-3-1974  to humble family with average income in a small town of Kalimpong in the district of Darjeeling. He did his schooling from St. Augustine’s school and later from Dr. Graham’s Homes which are in Kalimpong.

Being an ardent body builder, who stood 6th in the all India bodybuilding championship, he left his home and started working in a gym as an instructor in the year 1999 in Gangtok, Sikkim. During his struggle to make ends meet, he started venturing into the retail business. With just 1800 rupees in his pocket, he took a night bus to Kathmandu, Nepal, to explore the possibilities retail business could offer. With the meager amount of capital he had, he came back to Gangtok with a sack full of socks and started supplying to small retail outlets there. After struggling in the supply business, he started his with his very own retail outlet in the corner of a market in Gangtok.  His efforts and hard work paid off and today he owns 15 retail outlets with brands stores like Puma, Adidas and Clarks in Gangtok, Kalimpong and Silliguri.

A true practitioner of Buddhism, he started donating a certain portion of his income to the needy families and underprivileged children. Today, there are a lot of children working or getting better education who were and are sponsored by him. He has also built a huge shelter for animals to stop them from being slaughtered for meat.  To ensure this endeavor, he started the Yakha Foundation where the foundation does not accept foreign or external aids but get funds from the profit generated from all the Yakha ventures. The Yakha Foundation now facilitates and sponsors not only the needy but also the talented youths in all fields of sports and entertainment by facilitating them with avenues to showcase their talent.

To promote Kalimpong as one of the prominent destinations in eastern India, The Yakha retreat and spa is his first venture in the hospitality industry. Very soon, The Yakha will have its very own  Yakha Adventures with activities such as mountain biking, Enfield motorcycle rides, low altitude trekking, hiking, cultural tours, camping, paragliding, rafting and other such sports. This will enhance local employment and cultural exposure and also giving the travelers different exciting ways to explore Kalimpong.

As in the words of Mr. Sonam Yakha, “The yak will keep surging ahead and giving it back to the people.”